I'm not sure if my hiatus from blogging this summer is over or not.  I still haven't decided how I want to spend my "free" time now that the kids are back in school.  So far, I'm not off to a very good start considering my August pie post is just now coming up on September 2nd!  I thought for sure I took care of this. Scout's honor...this pie really was prepared and devoured during the month of August!

We love to build a fire in our back yard in the evening and roast marshmallows.  Love it even better when the marshmallows cozy up with a slab of chocolate in between some crunch grahams.  Well, it's been too hot for fires most of the summer, so this is the next best thing. 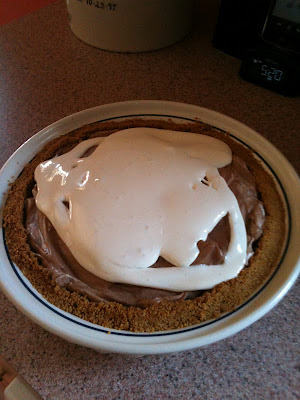 S'more Pie a la Marshmallow Creme
Here's What You Need:
6 oz. chocolate, finely chopped
1/4 cup whipping cream
2 Tablespoons dark corn syrup
1/4 cup water
2 teaspoons vanilla
4 oz. cream cheese, softened
1 cup whipping cream
1/2 cup powdered sugar
1 cup tiny marshmallows
Graham Cracker Crust
Marshmallow Topping (recipe follows)
Here's What You Do:
In a heavy saucepan, mix the chocolate, 1/4 cup cream, corn syrup and water.  Heat and stir constantly over medium heat until smooth.  Remove from heat and stir in vanilla.  Cool 20 minutes stirring occasionally.
In a bowl, mix chocolate mixture and cream cheese.  In a chilled mixing bowl, beat 1 cup cream and the powdered sugar with mixer until soft peaks form.  Using a spatula, fold the cream mixture into the chocolate mixture.
Place marshmallows in the bottom of the graham cracker crust.  Use your favorite recipe or just buy one already made to speed things up for you.  Spoon the chocolate mixture over the marshmallows.  Cover and chill at least 4 hours.  Spoon on the marshmallow topping before serving.
Marshmallow Topping:
In a bowl, mix one 7 ounce jar of marshmallow cream and 1 Tablespoon of milk.  Pour over top of pie before serving.
Posted by Buckeye Mom 0 comments

Labels: In The Kitchen

Is there a recipe in your family that has a history or maybe there's even a legend behind it?  Maybe there's a recipe that was once prepared by a beloved family member that is no longer with you and it was never written down and you have tried, in vain, to replicate it?

I've blogged about my maternal Grandmother many a time on here.  She was famous for entering recipe contests (and winning!), for pulling pranks (fake ice cube with fake fly, birthday cake candles that won't blow out, etc.) and for her butterscotch pie and homemade noodles.  Over the years, since her death, I have oftentimes regretted that I never took the time to spend an afternoon with her to learn how to make those noodles.  I craved them during the pregnancy of my firstborn.  Grandma was already gone by then and made me want them all that much more.

Her butterscotch pie recipe was published in a local cookbook many, many years ago and I have made this recipe many times over.  Each time trying to decide if I got it right, this time.  I swear, this was her final prank.  Publishing a favorite recipe and leaving out one of the key ingredients.  Maybe the key ingredient really was love, which means, the butterscotch pie simply never will be the same. 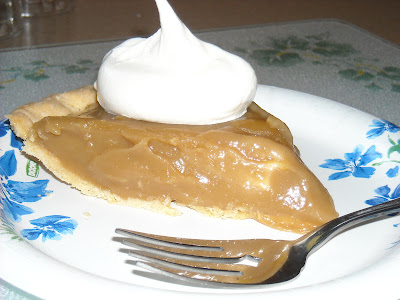 Here's What You Do:
This is one of those recipes that I never truly appreciated as a kid.  It's a rich dessert and one that my palate simply did not accept until, sadly, it was too late.  My brother called me earlier this summer asking me to walk him through the steps to make this pie.  He was making one to share with his son.

Without further ado...the Legend of the Butterscotch Pie:

Go ahead and bake your pie shell and set it aside to cool.

Cream the brown sugar, flour, butter and egg yolks.  Heat the milk on medium and whisk in the sugar mixture before the milk gets too warm, otherwise, you'll end up with a scrambled egg mess and have to start all over again.  This has happened to me before and it's not fun!  Whisk constantly until the mixture comes to a boil.  Continue to whisk for one minute after it begins to boil.  Remove from heat and pour into the pie shell.  Let it cool a little and then chill in the fridge.

Some recipes call for making a meringue but I prefer the way Grandma always served it and that was with a very healthy dollop of whipped cream!

Warning:  So rich it makes your teeth itch!  No, really!
Posted by Buckeye Mom 0 comments

Labels: In The Kitchen 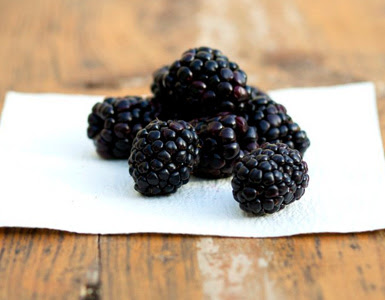 Buckeye Mom
Ohio, United States
I am a stay-at-home Mom to 2 boys and 1 girl, although I rarely actually stay at home! Before going into "retirement", I was an account manager/marketing manager at a recruitment advertising agency. My husband and I are both graduates of THE Ohio State University. Go Bucks!

The Cookie Journey (2010) and Cake Odyssey (2011) are in the past. I'm looking forward to overcoming my fear of pie crust in 2012. My oldest brother still harbors resentment over my lack of pie-baking growing up and my oldest son routinely proclaims, "I like pie!" The pressure has gotten to be too much for me.
Pie it is! Join me on my new trip through the kitchen as I pour over countless recipes to try out new and interesting pie recipes as well as share other old and new favorites!

What I Am Reading

What My Kids Are Reading